A Guide to Building Your Own Crypto Mining Rig 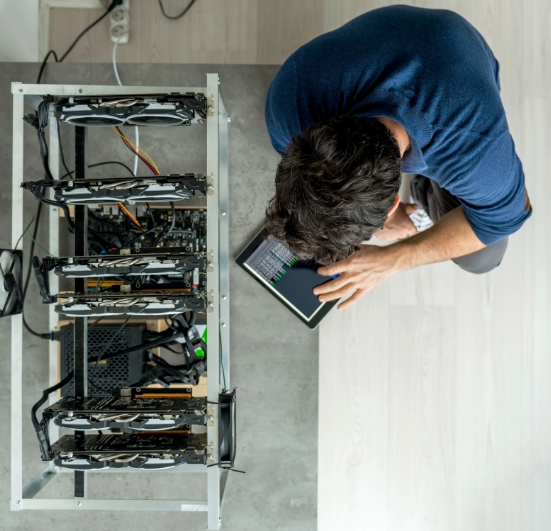 Cryptocurrency mining has in many respects become an industrialized business. But despite the concentration of hashing power, the increasing difficulty and diminishing returns, in some cases it can still be profitable to mint coins as an amateur miner, probably the most honest way to earn some digital cash. Here’s a guide on how to build a mining rig.
Is It Late to Get Started With Crypto Mining?
A Guide to Building Your Own Mining RigThe reduced market capitalization of digital assets, in comparison to last year’s all-time highs, has inevitably affected the profitability of cryptocurrency mining. That’s a fact of life but still there’s a number of other factors that can influence the outcome of mining – electricity rates, regulations, hardware prices, and even climate, to name a few. Their weight in the equation may vary significantly in different locations, from one jurisdiction to another.

In times when major producers of highly specialized equipment like Bitmain and Bitfury are building ASIC chips and rigs for mining bitcoin with ever-increasing productivity and efficiency, some say crypto mining in homes, basements and garages is a dying hobby. Add to that reports about GPU manufacturers like Nvidia losing interest in the crypto segment of the market, miners in Iceland exploring better opportunities in other sectors and the future of amateur mining starts to look bleak.

But that’s not necessarily the case. There are a number of altcoins whose developers continue the struggle to maintain ASIC-resistance. There are many countries where the costs of mining are relatively low – in some parts of Russia, for example, electricity rates are below $0.04 USD per kilowatt. For many enthusiasts around the world at-home mining is not a lost cause, not yet. Many of them can still support the family budget without huge expectations for revenue and profit.

Setting up a Home Mining Rig With GPUs
A Guide to Building Your Own Mining RigCatering to the crypto community, Decenter, a popular Russian platform supported by experts, developers, and investors, has answered many questions asked by crypto enthusiasts. Recently, the information portal published a guide to building mining rigs that encompasses the basic steps to becoming an amateur miner. The outlet has done its best to protect wannabe miners from unnecessary expenses and help them make the optimal choices, and ultimately make a buck or two.

Rig frame – The experts at Decenter recommend that you choose an aluminum one. The metal is more rigid in comparison with wood, it’s not flammable and is а good conductor of electricity which is a serious advantage as all components of the mining system must be grounded.

Motherboard – It should be able to support between 4 and 8 video cards which means it must have at least 4 PCI-E ports. Some of the most popular motherboards are based on P45, P43, and P35 chipsets – Gigabyte GA-EP35-DS3L and Asus P5Q Deluxe, for example. An inexpensive option is the Z270-based Gigabyte GA-Z270P-D3 which powers up to 6 GPUs and costs less than $100. Gigabyte GA-970A-DS3P is a good alternative for AMD fans, but it supports only 5 cards.

A Guide to Building Your Own Mining RigRAM – Quantity beats quality here as productivity is not so heavily dependent on the generation or the price. At least 4GB are needed. The most common type these days is DDR3 which is also cheap ­at around $5 per gigabyte. It’s important to make sure, however, that the motherboard supports it as some of the newer models don’t. DDR4 is more expensive at ~$40 – $50 for a 4GB stick.

Storage – The hashing power of mining rigs is not really influenced by the size and the speed of the storage device. The system uses it to occasionally record logs. Any hard drive with a 50GB capacity will be sufficient. Buying an SSD is not really justified as a good old HDD will do the job and it can be had for as little as $10−$15 on the second hand market. Make sure to check for bad sectors before you buy it.

Video cards ­– GPUs, or Graphics Processing Units, are by far the most important component of a cryptocurrency mining rig. Both Nvidia and AMD have their advantages and shortcomings. The main differences are related to mining efficiency in terms of hash rate and power consumption which also depend on the algorithm of the mined coin. Nvidia cards are generally easier to tune, less prone to cooling problems but need a bit more energy. On the other hand, AMD GPUs are harder to resell after a while as they are less popular with gamers.

A Guide to Building Your Own Mining RigStaying away from the newest and most expensive solutions, Nvidia GTX series offers good results when mining Equihash coins like Zcash and Bitcoin Private. Ethereum and other cryptos based on the Ethash algorithm do better with cards such as RX580 which can reach over 30 Mhash/s, while the 6GB GTX 1060 can only do around 22.

Do you think home mining will remain profitable in the long run? Share your thoughts on the subject in the comments section below.