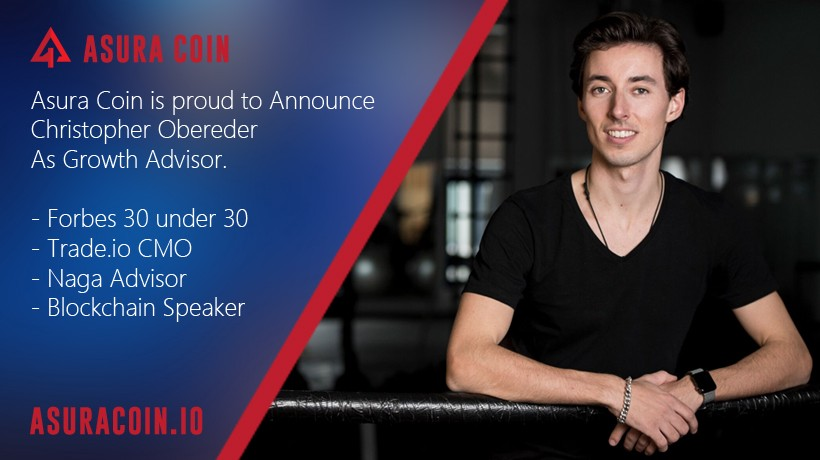 We are happy to announce that Chrisopher Obereder has joined the Asura team as a growth advisor. He will be helping the team grow with his vast experience in the Business, Blockchain and Crypto industries.

Christopher Obereder is a 26-year-old serial entrepreneur, who lived in Silicon Valley over the last years and is part of the Forbes 30 under 30 of 2017. During his career Christopher has built himself a very diverse business portfolio ranging from games to communication and social media platforms. Additionally, he has built a user base for his apps and games exceeding 300 million users around the globe.

Christopher is the founder of the social media platform Inlope, which was described as “Facebook’s Latest Rival” by the Financial Times. He sold his shares three weeks after launch. Amongst various others, companies like Microsoft have backed Christopher which enabled him to attract over 30 million fans on social networks. Christopher has worked with over 500 of the leading social media celebrities including Snoop Dog, Chris Brown, Skrillex, Kingbach, Paul Logan and many more. He was able to sell one of his gaming startups “Steve — The Jumping Dinosaur“ within 4 weeks to one of the largest gaming companies in Europe (Genera Games, which makes the games for Disney).

Christopher is also the CMO of Tellonym, which is one of the leading feedback tools with over 10 million active users.

Apply for whitelist on our
Official Website: https://asuracoin.io/
Join our discussion on
Telegram: https://t.me/asuracoin