Decentralization helps to get rid of intermediaries, stimulates the P2P economy, and allows for a fair sharing of benefits among the participants. Swisstok creates a decentralized cryptomail.

Swisstok platform includes:
• a user application for secure email communications,
• software for a standardized service node which serves as the basic unit of a decentralized peer-to-peer network and includes a mail server and a billing system.

Swisstok nodes can communicate directly, going without a central email server. A node is installed on the owner's site, the owner being a company or an individual; and either the owner's resources or cloud resources can be used for this purpose. The owner can allow anyone to connect to the node, from its employees to passers-by. Thus, a "2-level P2P scheme" is introduced; this is a new economic model which excludes intermediaries. We provide a profitable alternative to the common extrusion of business into a cloud environment or to the costs of corporate mail servers. This appears to be an optimal solution for companies interested in operating a network of their own and providing intercommunication services to their employees or customers. External users can also be connected, and the company can earn income from advertising and disk space provision.

The scheme is very simple for users. A new user downloads the application or opens the browser, selects an available node, and connects to it. If the node is free (for instance, a corporate communications node for employees), all its services are free of charge for the user as well. If a node is paid, the user participates in the new SWSToken exchange economy.

The node owner determines at its own discretion if the node is a paid or a free one for the users. In fact, the owner now has a cloud mail service of its own. Users connecting to paid nodes can gain tokens for each incoming email (from paid users not on his contact list). A paid node earns interest on ad messages views, and on selling cloud disk space to users. Thus, Internet giants are superseded by an individual node and a user as the center of revenue in the network.

Later we shall add the possibility to commercialize ad viewing, as some other services do. Game mechanics is utilized to get a user involved. This serves as the foundation for the new loyalty-based economy when the customer is really interested in viewing ads and is rewarded for that. And this is not some kind of occasional targeted user or a bot, which Google is showing the ads to, but a real person interested in interaction with the brand. Companies can personalize their offers to meet individual needs, while reducing their budget at the same time. Thus, SWSTokens are used to pay the nodes for viewing of advertisements by node’ users. More nodes mean more advertisers. More users mean more active ad views and usage of network services. As all the tokens are issued at the beginning of the project in a limited amount, the price of the tokens will be growing along with the growth of Swisstok network.

Sending Email Marketing messages and getting a reward for receiving them is available only to paid nodes. Such mails are typically used for promotion or subscriptions. The generic principles are as follows:
• The sender pays for the message.
• The payment is distributed between the sending node, the receiving node, and SWSToken holders.
• The price per message may vary according to specific commercial conditions, but it should remain within a reasonable spread in FIAT (so that in case of high SWSToken rate it would not skyrocket, as well as in case of a low rate it would be negligible). The exact approach will be defined.
• The payment-award mechanism is implemented by publicly available smart contract.

The chart below illustrates this approach:

• At the time of sending a message, the sender signs a smart contract and pays a certain fee upon its successful delivery.
• The message comes into the decentralized cloud, goes from the sending node to the receiving node (SMTP and IMAP servers included in a node), and is eventually delivered to the receiving party. Initially set by Swisstok, but later the possibility to define one’s own pricing policy will be made available for nodes.
• The receiving party confirms delivery (as a rewarded recipient the user is supposed to do so), thus triggering the smart contract.
• The fee is distributed between the receiving party, the sending node, the receiving node, and SWSToken holders (having an account at one of the nodes).
• Swisstok get its reward as the biggest SWSToken holder.
• Free user also gets the mail but not the reward. Such unclaimed reward goes to Swisstok.

Ad providers are also a paid user category. They are interested in private information about users for lead generation purposes and for showing precisely targeted ads. Thus, the status of an ad provider must be declared officially in the paid node interface, and users give their express consent to make their data available to this specific ad provider. If a user does not allow a specific provider to collect its data, the provider will still able to show banners to this user. Gathering private data, sending ads, and getting a reward from receiving ads are options available to paid nodes only. Free users may also provide their data and see banners, but this will not imply any reward. Such unclaimed reward goes to Swisstok. The scheme below illustrates the private data exchange process: 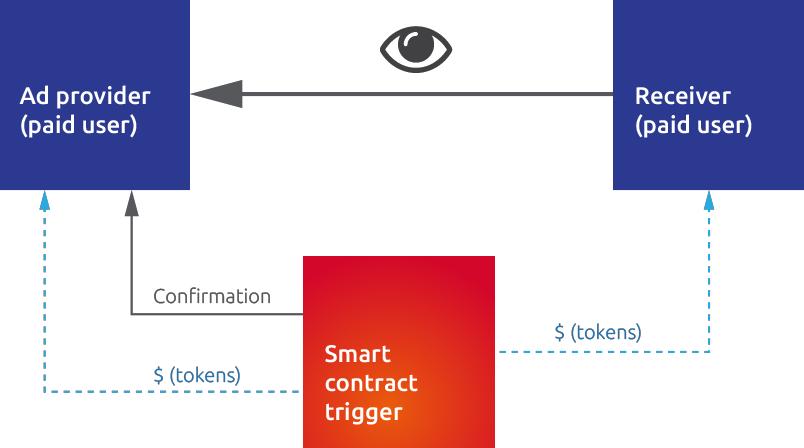 • At the time of a data extraction request, a smart contract between a user and the advertisement provider is signed.
• The invitation to share the information about the receiving party is included in the message.
• If the receiving party accepts, the data is sent to the ad provider.

• Upon a successful click on a banner, the smart contract is triggered.
• Payment is distributed between the sender, the receiving party, the intermediate nodes which participated in data extraction, and SWSToken holders (having an account at one of the nodes).

A node is a major driver of the project; therefore, our primary task is to hold the nodes’ attention and to promote benefits among them. Free nodes get a new cutting-edge technology such as encryption and spam protection free of charge. We need them to enlarge the network, and they would be covering 80% of it. What about the remaining 20%?
Payable nodes have three major income sources:
• users send and receive marketing emails,
• ad providers show and users view banner ads,
• users buy additional space.
These services bring 1634 USD annually, after deduction of paid plugins bought from Swisstok. We do not consider savings from not-running services like MS Exchange or G-suite. We suppose such revenue is enough to make system administrators evangelists of the Swisstok technology.

A user’s budget is profitable, too, taking into account the direct and indirect benefits. A typical mail user spends time worth 25 USD every year on viewing spam. In our case, users are allowed to introduce black and white lists, thus being completely isolated from unwanted emails, and they save these 25 USD. We provide a high level of encryption and security for our users. If we look at the pricing of our major competitor, Proton mail, we see the basic encrypted tariff at approx. 56 USD per year. In case of a paid user (one connected to a paid node), such a user gets about 5 USD per year for viewing of ads (after deduction of additional space rent). Thus, a user may earn benefits of up to 86 USD per year approximately.
Remember our target – communication should be aimed at the benefit of the society as a whole and not only of its selected players.

For more information: https://swisstok.io/
Our whitepaper: https://swisstok.io/docs/White_Paper_Swisstok.pdf
We would appreciate any feedback, here in the comment or on our channels (https://www.facebook.com/Swisstok/, https://twitter.com/swisstok,https://t.me/swisstok).

We welcome any help from the community.